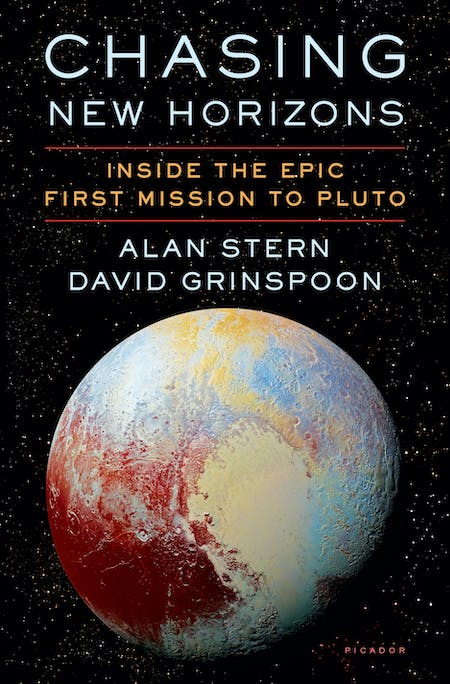 The up close, inside story of the greatest space exploration project of our time, New Horizons’ mission to Pluto, as shared with David Grinspoon by mission leader Alan Stern and other key players.

“A remarkable new book…told in exhilarating prose that moves this incredible narrative briskly without getting mired in the tall weeds of technical jargon…. Stern and Grinspoon take you on an uplifting, exhilarating, fascinating journey, all without leaving the comfort and oxygen of our planet.”—CHICAGO TRIBUNE

“When the New Horizons spacecraft flew from here to Pluto and beyond, the pictures and data forever changed the way we view our Solar System and our place within it. Stern and Grinspoon show us what NASA can do when the United States brings its best. New Horizons is still flying, and for us Plutophiles it’s the adventure of a lifetime.”—BILL NYE, science educator, CEO the Planetary Society

“An exhilarating trek into the ‘wild black yonder’.”—NATURE

“A space and science book that reads more like a thriller.”—HOUSTON CHRONICLE

“Here is the exciting, moment-by-moment account of how a dream becomes a successful mission to another planet. Chasing New Horizons is a cliff-hanger, a page-turner, a spine-tingler, and, ultimately, a reason to stand up and cheer. Readers are ‘Go!’ for Pluto and beyond.”—DAVA SOBEL, New York Times bestselling author of Galileo’s Daughter and The Glass Universe

“To Pluto and beyond! This is a thrilling and very human account of one of the greatest scientific adventures of our generation.”—BRIAN MAY, astrophysicist and lead guitarist of Queen

“A compelling account of one of the most ambitious space exploration missions ever conducted. A visionary of exploration, Alan Stern takes the reader through his lifetime journey of discovery culminating in the 3 billion mile trip to Pluto.”—CAPT. MARK KELLY, retired NASA space shuttle commander

“Imagine launching a spacecraft that will travel faster than 30,000 miles per hour, for nearly a decade, until it passes the previously unreachable surface of Pluto, capturing some of the most beautiful images ever recorded. This mission is a demonstration of the best side of humanity and Alan Stern is a true superhero!”—DAVID BLAINE, magician and space enthusiast

“A thrilling ride.”—Jane Ciabattari, BBC.COM “10 Books to Read in May”

“Alan Stern and David Grinspoon take the reader to Pluto on a historic odyssey from its inception to its conclusion.”—CAPT. JAMES LOVELL, commander, Apollo 13