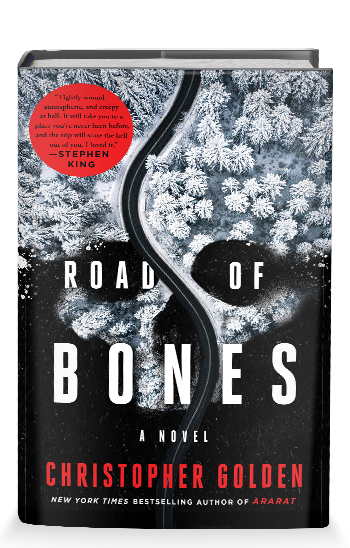 A supernatural thriller, where a small film crew is covering an elusive ghost story about the Kolyma highway, a road built on top of the frozen bones of the thousands of prisoners who once traveled to work in the camps of Stalin’s gulag.

“Tightly wound, atmospheric, and creepy as hell. It will take you to a place you’ve never been.”
—STEPHEN KING

“Unrelenting and will chill you to your core.”
—PAUL TREMBLAY

“This book is scary as f***. Do not read alone in the dark.”
—CATHERYNNE M. VALENTE

“The road is long, the night is cold, and there’s terror at every pullout, nothing but dread between.”
—STEPHEN GRAHAM JONES

“A breathtaking experience, a glacial gust of a book, Christopher Golden’s best yet.”
—JOSH MALERMAN