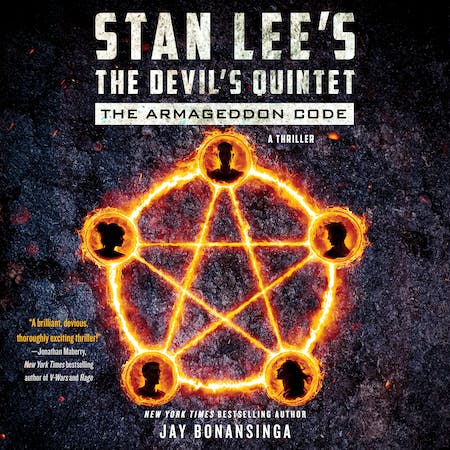 "Both writers owe a huge debt to Charles Everett for narrating this powerful audiobook. Without flashy sound effects, Everett expertly leads listeners through this story about a disparate group of warriors who use the devil himself to do good." —AudioFile

In Stan Lee's The Devil's Quintet: The Armageddon Code, the world-famous architect of the Marvel Universe, teams up with New York Times bestselling author Jay Bonansinga to unleash a bold new superhero series on the world.

A five-person special ops unit, composed of a diverse assortment of former Navy SEALS from all walks of life, are responding to a terrorist threat deep in the Caucasus Mountains when their mission goes south in a big way. Facing certain death and torture, they’re unexpectedly offered a Faustian bargain by the Devil himself, who grants them unearthly powers in order to send evildoers to Hell on his fiendish behalf.

But “The Devil’s Quintet” do things their own way, fighting to protect America and the world, while trying their best not to let their hellish new abilities corrupt them beyond redemption . . .