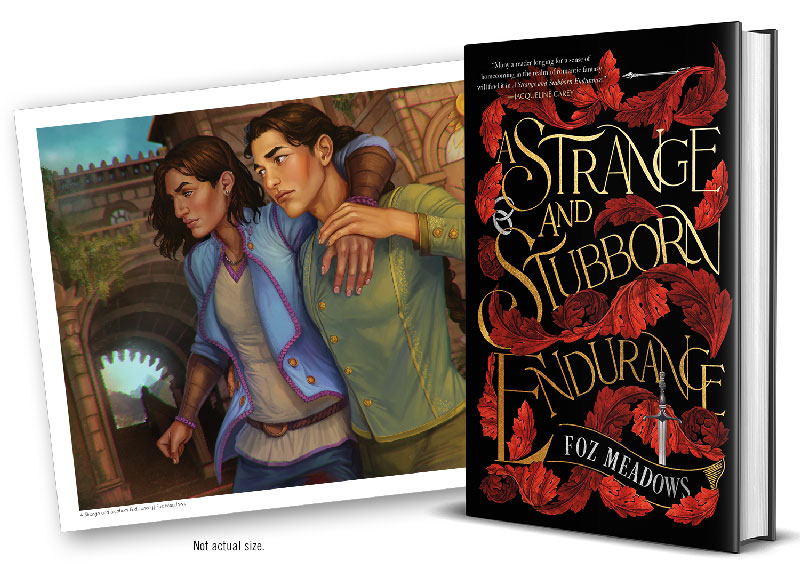 “Many a reader longing for a sense of homecoming in the realm of romantic fantasy will find it in A Strange and Stubborn Endurance.” —Jacqueline Carey

“Stolen me? As soon to say a caged bird can be stolen by the sky.”

Velasin vin Aaro never planned to marry at all, let alone a girl from neighboring Tithena. When an ugly confrontation reveals his preference for men, Vel fears he’s ruined the diplomatic union before it can even begin. But while his family is ready to disown him, the Tithenai envoy has a different solution: for Vel to marry his former intended’s brother instead.

Caethari Aeduria always knew he might end up in a political marriage, but his sudden betrothal to a man from Ralia, where such relationships are forbidden, comes as a shock.

With an unknown faction willing to kill to end their new alliance, Vel and Cae have no choice but to trust each other. Survival is one thing, but love—as both will learn—is quite another.

Byzantine politics, lush sexual energy, and a queer love story that is by turns sweet and sultry, Foz Meadows's A Strange and Stubborn Endurance is an exploration of gender, identity, and self-worth. It is a book that will live in your heart long after you turn the last page.